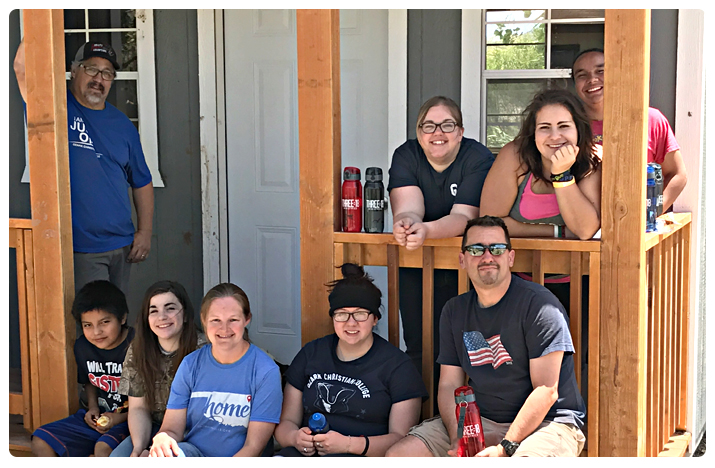 Oklahoma to Arizona: Our 2017 Senior Trip

To our brothers and sisters in San Carlos,

It’s hard to believe that only a month ago we journeyed through the deserts of Arizona to you. We didn’t know what to expect, all we knew was that there were some people running a ministry called 3:18 on a reservation. We thought we were being sent to help, to make a difference. What we could never have guessed is how you would make a difference in us.

With four high school seniors and three sponsors we set out April 23rd, 2017 at 6:30 am. for the airport. After landing in Phoenix we drove an hour and a half to Globe where we met up with our hosts who showed us to our lodgings: the fellowship hall of a church in town. After a brief orientation, we turned in for the night.

The next morning, after breakfast with the 3:18 team, we made the twenty-minute trek from Globe to the San Carlos Apache Reservation. The next four days were filled with construction and working with children. We worked alongside Tory and Robert, members of the 3:18 team, on the interior of a tiny home they were building for an Apache family. When we weren’t working, we were playing with the kids who showed up at the worksite.

The thing that made the biggest impact on me this trip were our seniors. I do not even know where to begin. This group of seniors was amazing. Their love, patience, compassion, and work effort never ceased to amaze me. They never missed a beat, complained, or said ‘no’. I am so proud of them. – Kara, senior class sponsor

Tuesday and Wednesday afternoon allowed time for “Bible Club” at the Basketball court for the Apache kids that had come out to play. The Cookson Hills team put on a Bible lesson to open up the time together, and then we played games, did crafts, and hung out with the kids. For seniors Brittany and Vanessa, this was easily their most memorable part of the trip!

The thing that comes to mind when I think about working with 3:18 Ministries is a little boy that I worked with that week. He was about 3 years old and he really took my heart. I loved being able to work with him and teach him a little bit. I specifically loved the day that I sat down with him and helped him learn to write the alphabet. -Brittany, Class of 2017

The thing that hit me when I went on the trip was definitely the kids. There was this little girl that especially clung to me. She always wanted piggyback rides and wanted to be around me. A lot of these kids have had a hard life, just like me and my heart went out to them.  -Vanessa, Class of 2017

Each evening, we had a family-style dinner with the 3:18 team, cooked for us by one of the founders of the ministry. We talked, laughed, and got to know each other. During one particular meal, Robert and Liz (part of the 3:18 team) shared their hearts with us, openly and vulnerably. My heart broke for the hopelessness that abounds on the reservation. Broken people, hurting people, people desperate for love. That day I promised myself I would begin praying consistently for the Apache people.

I think the thing that made the biggest impact on me was the pain in the young children’s’ eyes.  The consequences of the abuse of drugs and alcohol were obvious, and the people that suffered the most were the children. One of the children I was playing with used me as a barrier when she saw her mother until she realized that she was sober. It broke my heart. -Epifanio, Class of 2017

Thursday, right after lunch, we begrudgingly loaded up the van to head north to the Grand Canyon. As excited as we were to see one of the seven wonders of the world, we were so sad to be leaving our new family in Globe. We all felt like we had known this ministry team for so much longer than 4 days. Vowing to return again, we got on the road.

The drive to Grand Canyon National Park took about five hours and brought before us every type of landscape you can imagine. From cactus-speckled deserts to snow-capped mountains to luscious green forests, we saw it all. Our time at the Grand Canyon flew by us and we shuttled a tour of the canyon, bought souvenirs, and got back on the road to head to Phoenix all before 11:00 am. After a relaxing evening and a (mostly) full night’s sleep, we got on a plane and headed back to Oklahoma, our hearts full and our bodies tired.

Thank you, my sweet San Carlos friends, for opening your hearts and homes. You gave us an opportunity to show Christ’s love to others the way it has been shown to us.

Until I see you again,
Ashley Allsbury

ABOUT THE AUTHOR — Ashley Allsbury, Middle School Teacher, is from Edmond, Oklahoma. She enjoys good conversation paired with good coffee, teaching at Cookson Hills, and watching a variety of nerdy movies and TV shows.