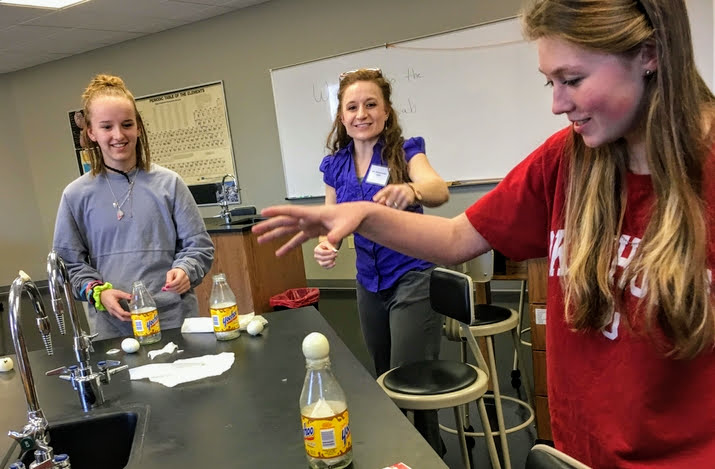 It seems a little surreal sometimes that five years has already passed since I joined the teaching staff at Cookson Hills. It seems even more surreal when I consider where I was mentally, emotionally, and physically in my life as I moved here versus where I’m at now. In 2013, I was a hot mess of anger and bitterness, with a side of communication issues! Now, I’ve learned how to forgive and talk through feelings that I used to think were meant to stay inside of me. I attribute these changes only to God and His working through the Cookson Hills community! God has used this community to bring new levels of healing and growth that I had once assumed were unattainable.

My first teaching job was in Miami, Florida. I was fresh out of college and living very far from home. That school year proved to be exceedingly difficult: difficult classes that I couldn’t manage, communication problems with my supervisors that strained those relationships, and verbal harassment from some of my coworkers. Miami didn’t work out; I was let go for the next school year, and I left Miami crushed and angry. My job there had meant everything to me, even though I was miserable. For the next two years, I lived with my parents and worked two jobs; all the while anger, bitterness, and insecurity made themselves at home in my heart and mind. By the time that I began applying for teaching jobs again, I didn’t believe anyone would hire a failure like me. That’s when my family and I found Cookson Hills.

I came to Cookson Hills in July 2013 to be a middle school science teacher; my degree is in secondary education, with a focus on history. Teaching science wasn’t just a different ballpark; it was a different sport! I felt like I had the gear to play hockey only to be thrown onto a basketball court! In addition, I had been out of the teaching game for nearly two years. I was scared out of my mind. However, my unfamiliarity with my subject matter was a secondary issue. I had never really gotten over Miami. I was certain my supervisors were “out to get me,” and I had relatively common nightmares that I was going to be unable to manage my students. But we serve a God whose love is stronger and deeper than the thickest, gnarliest roots of bitterness and insecurity.

God used a fellow middle school teacher and a couple that lived across the street from me to pour His love into my life. The couple across the street became a second family to me, pouring love and encouragement into me every time they saw me. My middle school coworker proved to be a wealth of knowledge and wisdom that he willingly passed onto me, particularly with classroom management. He helped build me up and assure me that I was a necessary part of the Cookson Hills teaching staff. The benefits of those connections were almost immediate. With God’s guidance, I started letting go of my anger and bitterness and forgiving all those in Miami who’d hurt me and myself for my own part in the mess. I gained a sense of confidence in my classroom that I had never had before. For the first time, I looked forward to going to work. My confidence began spilling over into my relationships with my students. I no longer felt like I was playing defense against my students. I developed meaningful relationships with my students! I recall a conversation I had with my mother after my third year of teaching at Cookson Hills; I was visiting for a while and was just casually talking about my classes. She looked at me with a rather piercing stare and said, “My word, you are NOT the same person as you were when you left Miami!”

I’ll be beginning my sixth year of teaching with Cookson Hills this year. I am still floored by this. I am amazed and humbled that God chose me to be a part of this community, the very community that God used to help me heal. I know that God has led all of us Cookson Hills teachers here to serve Him and build His Kingdom. Our God knows the individual needs of his children working for His kingdom! What better way to communicate God’s love to the students of Cookson Hills than to show them how God has healed us?!

ABOUT THE AUTHOR — Kellie is from Chattanooga, Tennessee. She is a middle school Social Studies, Science and Microsoft applications teacher at Cookson Hills. Kellie is an avid hockey fan, particularly the Nashville Predators, loves everything about coffee, and finds a peculiar joy for cleaning, "There's something about properly folded fitted sheets that fills me with intense satisfaction."