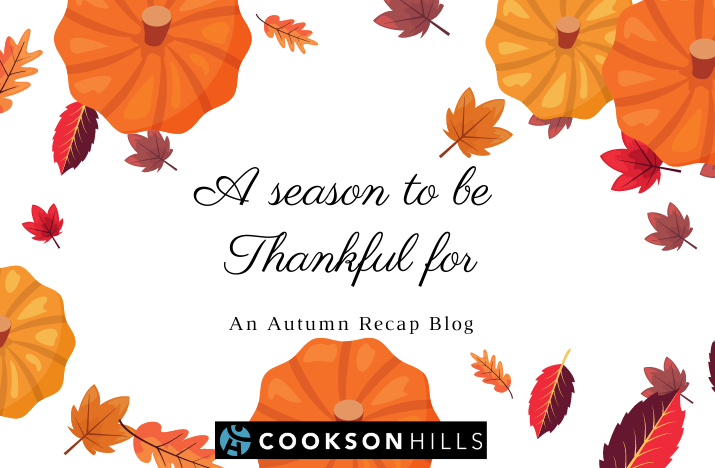 A Season To Be Thankful For

The autumn season has brought about several exciting moments on the Cookson Hills campus.  Today, we wanted to share with you the highlights of our fall sports teams, kids giving back, and gratitude during this unique and exciting time. We hope you enjoy this peek into a bit of life at Cookson Hills.

Sports can be an adventure. Getting to know teammates, making new friends, creating new experiences, and going to new places is part of a team’s experiences. This year, volleyball has been a blast!

Coach Lenardson and Coach McLendon come into each volleyball season working to win, but don’t get concerned with wins and losses. They are working to develop character in the players. “It’s just a game, yes, but we can learn from it,” Says Coach Lenardson. It’s a goal of the coaches for the team to have fun and learn.

The girls had worked hard and endured when things were difficult. Coach McLendon said, “The girls have taken the changes we have given them and adapted to them. Most of them have even learned and played in multiple positions!”

“These girls have really come a long way, and I think that is something to be proud of. I am super impressed with their abilities to learn. There was one time not fifteen minutes before a game, I had to switch five out of the six girls to new positions, and we won the game!”

The Cookson Hills volleyball girls tackled the state tournament with determination. Our girls powered through some intense matches, 3 of which were back to back! The tournament gave the girls the chance to showcase the skills and teamwork they acquired and honed throughout the season. Consequently, the volleyball team was able to clinch a tie for third place at the tournament, with two lady Chargers making the All-State team! The one senior on the team made the All-Tournament team as well! Special thanks to our coaches Robb Lenardson, Kellie McLendon, and Sarah Curry, for another successful season!

Fish banks were swimming around the school collecting coins. During a two week period, the senior class orchestrated a fundraiser to collect money for the International Disaster Emergency Services, IDES. The goal was $200, but the total raised was $469! This amount is enough to purchase 1,879 meals for those in need! Mrs. McLendon’s sixth hour class of sixth and seventh graders raised the most money. They contributed $108 and as a result celebrated with a pop and pizza party.

Coach Etcher has been the Chargers cross country coach for three years now, but he has been able to use his many years of experience to help boys who have never run before. Last year the team had only one inexperienced runner, but this year over half of the runners were brand new to the sport. He said about this season, “It’s a rebuilding year, and much of it has been about learning the mental side of running.” This time was also a year to prepare the 8th graders for running 5Ks in high school, which Coach Etcher said went very well.

The 2020 season has been extremely unusual with Covid-19; the cross country schedule was thrown off, and the season was extended. Coach Etcher changed practice techniques to make sure runners peaked at the state meet.

Coach Etcher has loved being able to share his knowledge and experience of running with new runners and enjoys the boys’ Thursday practices. Thursdays, the team has a game day where they play ultimate Frisbee, flag football, or soccer. “It’s a workout, yet it’s fun at the same time,” said Coach.

This season the team ran a race right here at Cookson! Community members got the chance to run alongside the boys to see where they placed with the Chargers. The Cowboy Jamboree offered the Charger Stampede event, and kids of all ages joined in while families cheered.

The season wrapped up on October 30th with the HCAA meet.  As a team, the boys finished fifth out of seven. One of the Juniors finished 5th, consequently earning all-state recognition. Coach Etcher said, “The guys worked hard all season. It was great to have the state meet at JBU, as we had several people there to cheer us on. Thank you for those that were able to attend our meets this year.” Special thanks to our coaches Kevin Etcher and Josh Curry, for making the season another success!

The equine program has sprinted out of the starting gate. Equine specialist, Lynnette Asbury, is so proud of her students and their progress. Students advance in the equine classes by earning horsemanship-level licenses. Each license requires the students to learn more about barn safety, care for a horse, and skills that increase with difficulty.

Not only do kids learn the ins and outs of horsemanship, but they also build a very special relationship with their horses. Many students have a deep and loving bond with their horses, therefore it encourages the students to stay engaged. Evidence shows the therapeutic benefits of horsemanship. Mrs. Asbury has seen a kid’s confidence, and work ethic grow. “Kids learn that work can actually be fun,” she says.

Mrs. Asbury is always welcoming people to learn about God’s wonderful creatures. Each horsemanship lesson taught has a Biblical message. The Equine Program also presents excellent team-building opportunities. The volleyball team has been to the barn several times for SPUR games. Families can also join Mrs. Asbury and the horses to play games and grow closer to each other.

In addition, Mrs. Asbury and one of our counselors have attended training in Texas for EAGALA. The leadership team is excited to bring this program back to our campus for our students.

Cookson Hills has been blessed to be able to continue operations during this difficult time in the world. The staff and students on campus are extremely thankful that these activities have been able to take place. It is also encouraging to see growth in the students during such a strenuous season.

ABOUT THE AUTHOR — The yearbook class of 2020: Emily, Kya, Sidney, Jonny, and Micah. Advised by Mrs. Myrick and Ms. Lauren. This publishing class produces a school newspaper each term called the Charger Chronicle as well as a yearbook at the end of the year.