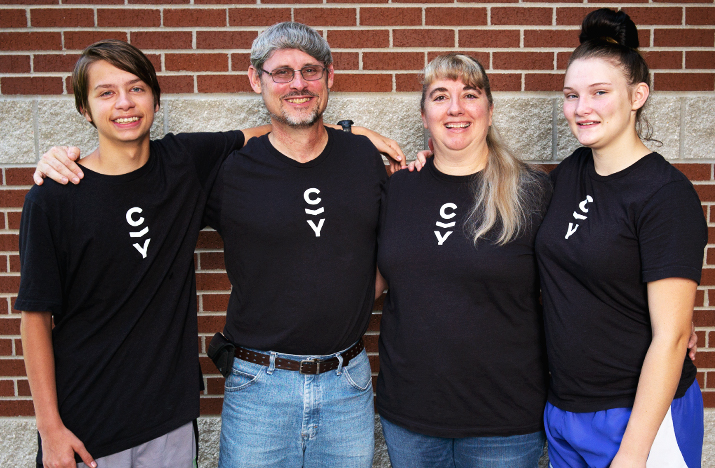 Contrast- A Recap of CIY

This was our 5th year of taking ten awesome high school students to CIY MOVE. Every year, prior to the event, Satan whispers in our ear, “It’s too much time… the drive is too long… it’s too much work.”  But, it’s an honor to do it, and we praise God as we watch changes occur in our students as God’s Word is presented.

CIY MOVE is a fabulous event that helps high school teens learn to worship and grow in Christ. This year we took four young men and six young women to CIY. The theme was from 1 John, entitled: “Contrast.” We learned about contrasting the extreme differences between life with and without Christ. I had never studied 1 John in this way, but the contrast presented in God’s Word here is vivid and moving. The CIY staff took this scripture and brought it to life with beautiful artistry, worship, and powerful messages. Over the course of the week, we saw God work in a variety of ways. It is such a wonderful privilege to share with our students as they open their hearts and minds to worship. Each year is a special time and this year was no exception!

Here’s what two of our students had to say:…

Bri:  Of all of the messages, the one which stuck out to me the most was light and darkness. In this message we compared light to dark and how some of us live in the dark and the only way to have real peace is to be in the light with God. While at CIY I decided to step out of the darkness and walk in the light of Christ. One big thing I learned from this year’s CIY was that everyone has a story and some kind of baggage. Even if people are smiling on the outside it doesn’t mean there isn’t tough stuff going on inside. I thought I was the only one going through stuff, but seeing others who have gone through the same thing, or even worse, really opened my eyes.

Cameron: My experience at CIY Move this year was breathtaking and life-changing. This isn’t some purposely-sappy, over exaggerated story – this is really what happened, and God really has changed my life through it. About halfway through the event the speaker was talking about many things, but one topic stuck out to me – secret sins. He talked about how many of us have secret sins. He did an anonymous poll during the message and it was found that a lot of people engaged in a secret sin. I was one of those people. After the message, the speaker gave an altar call. He said that, if you were engaged in a secret sin, that God can save you and will – if you are willing. I made that decision to walk out of the darkness and into the light. It was an amazing feeling, but what happened next was breathtaking. I got back to my seat and was standing during worship, I suddenly started to feel very strange. See, I have always carried this deep, ever-present nervousness and anxiousness inside of me but in this moment, I became more and more calm. Suddenly it was replaced by this amazing feeling of warmness, love and grace, all washing over me instantly. It was like I was being embraced by God himself. I started weeping intensely. (Note – I hardly ever cry, and before this moment I hadn’t cried for a year and a half.) I just kept getting more and more overwhelmed by the pure power of God’s love rushing over me like a waterfall. During our small group time, I would calm down and then immediately start sobbing again – I finally understood how much God loves each and every one of us. I tried explaining to our group multiple times what I was feeling, but every time I got choked up. God broke me so hard. I’m so glad that I made the decision to step out of the darkness of my secret sin and into the light of Jesus once again. Just knowing that God loves us so, so much, and that we can walk out of the darkness of sin and into the light of His love anytime and anyplace is extremely powerful. He’s ready with open arms whenever you decide to let Him into your life.

What testimonies! While at CIY we had one young lady surrender her life, accepting Christ as her Savior and two students who recommit their hearts and lives to Christ. By the end of the week, our students were in awe of how the Holy Spirit was moving and working in the hearts of all who attended.

It is humbling and amazing to work at Cookson Hills with these outstanding students. I love seeing Christ move in our students. It brings me encouragement  to stand against Satan’s whispers of doubt, and boldly answer with a resounding: “Yes it’s hard…but absolutely worth it!”

ABOUT THE AUTHOR — Dr. David Green is from Lawrence, KS. He and his wife, Lauri, are in their 9th year at Cookson Hills. He loves God's creation and likes to spend as much time as possible hiking, fishing, and canoeing.