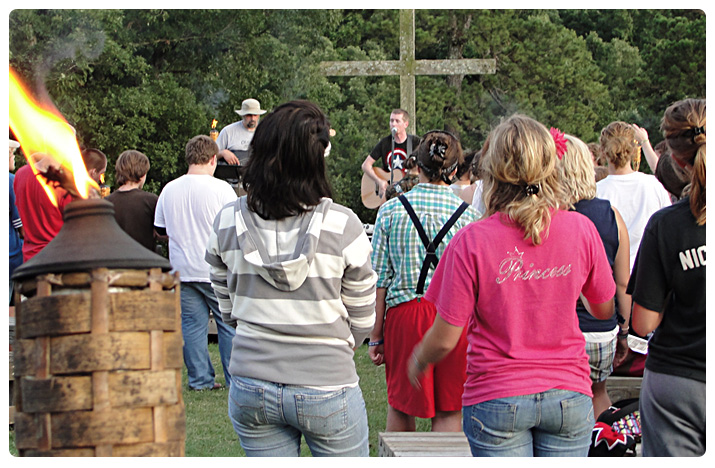 For 60 years, Cookson Hills has provided ministry to children by offering home, school, and therapy. Over the past 30 years, Cookson Hills has focused greatly on improving the quality of living conditions and programs offered at the main unit in Kansas, Oklahoma. This focus started with the accreditation of our high school in 1984 and has gone on to see our first ever capital campaign, building 12 new homes, a dining hall, and educational facility. This is the story of Cookson Hills from 1980 through 2017.

General highlights from the 1980s included adding a Library Media Center to the school with the first computers, installing a swimming pool on the 80 property, and building a 10-unit apartment building for “Grandparents” and other staff members. Additionally, Cookson Hills constructed a new gymnasium at the top of the hill, being the first building on what is now known as “the Hilltop.” The 80s saw a few bumps in the road as well- the original clothing store burned down, massive flooding caused substantial damage to the Hollow, and satellite units began to enter the refinement period. For more information on the satellite units and their closures, please refer to Part II of our history series.

From the very beginning, Cookson Hills wanted to provide an education to all its students. However, from 1965 through 1984, high school students had to attend school at Kansas High School. Finally, in 1984 Cookson Hills High School achieved state accreditation credentials and students were able to enroll. Around this same time, USDA regulations began to change around the nation, making it no longer financially responsible for Cookson Hills to maintain our own herd of cattle, dairy barn, chickens, and butcher shop.

From 1985-2013, one of the most enjoyable experiences for staff and students alike was Wilderness Camp. This typically occurred in the back of the 1000 acres and included high and low ropes courses, tent camping, and praise and worship times on “Chapel Hill.” New physical challenges were added each year and included a zip line, two line bridge, screamer, scum pond, and climbing wall, as well as building rafts to float and clean-up the Illinois River. One year the groups even rappelled down the water tower! Physical activities always had a spiritual application. This emphasis on spiritual well-being in the 80s was completely intentional as the heart and motto of Cookson was “Saving America’s Youth.”

Students from Cookson Hills took home a national Bible Bowl championship in 1990. State winning basketball, volleyball, and soccer championships were also achieved throughout the 1990s. Additionally, family reunification and equine programs were started, creating a foundation for expanded therapeutic services in the years to come.

In 1990, donors sent in one million Campbell’s soup labels, equipping the ministry with a new 15 passenger van.

In 1995, major effort and emphasis was directed toward improving the quality and infrastructure of the campus. A new office building along Highway 10 was completed. All “big houses” had central heating/air units installed, and many buildings got a facelift with new vinyl siding. In addition, two childcare homes were built and occupied. Many of the mobile homes for housing staff were replaced with more cost-effective and permanent housing.

In 2000, cooksonhills.org was established, preparing Cookson Hills for a move into the future of technology. In this same year, classrooms in the school were wired for internet access and teachers were given access to utilizing technology in their classrooms.

In 2007, construction on the Family Training Center, including stables, indoor arena, covered round pen, and family counseling area is completed. This provided a centralized location for equine assisted behavioral counseling for students and their families. As the family reunification and therapy programs began to take off at Cookson, the motto became, “Providing Help, Hope, and Healing.”

Cookson Hills began their first-ever capital campaign, Building on a Legacy of Love, in 2011 with the goal of raising 14 million dollars for new facilities on the Hilltop. This included a new state-of-the-art school for 1st grade-12th grade, a new dining hall, and 12 new child care homes which would replace the homes that had been used for 50 years. Funds were raised for this project from 2011-2017 and over 3000 volunteers and 150 churches from 15 states participated in the construction projects.

In 2013, Cookson Hills Christian School received accreditation by the Association of Christian Schools International (ACSI). Also during this year, Cookson received the Oklahoma Nonprofit Excellence (ONE) Award for Youth Development.

By 2017, the new “big houses” were opened on the hilltop leaving the “80” property unused. After many efforts to sell the property fell through, leadership concluded that this property needed to be used for Kingdom work and no longer sit collecting dust.  In June of 2017, this property was gifted to a Tulsa based non-profit doing uncharted work for God’s Kingdom.

Just like always, kids start their life at Cookson Hills by becoming part of a family. They move into a home with married houseparents and up to nine brothers and sisters. Kids receive love from their houseparents that they may have never felt before. A healthy family, where each child is a valued member, is the best place to learn how to cooperate, love, and respect others. Learning happens everywhere at Cookson Hills; around the dinner table, while doing chores, at therapy, while making friends, and at school. All the adults here work towards a common goal: We want to see kids heal and achieve their goals so that they can go on to lead healthy lives. A beautiful part of life at Cookson Hills is the integrated approach that assures kids don’t slip through the cracks. Today Cookson focuses on what they do best, which is providing a home, a school, and therapy for kids who are at-risk. The motto? Well, it speaks for itself, “It’s not foolproof. It’s difficult. And, it’s worth it.”

ABOUT THE AUTHOR — Rachel Wages, Executive Assistant, is from Montana, and loves coffee and traveling with her husband and kids. Her greatest joy in life is being a daughter of the King!

Sarah Curry, Manager of Storytelling Group, is from Jamestown, Ohio and enjoys volleyball, spending time with her husband and daughter, and belting the Wicked Soundtrack at any given moment.