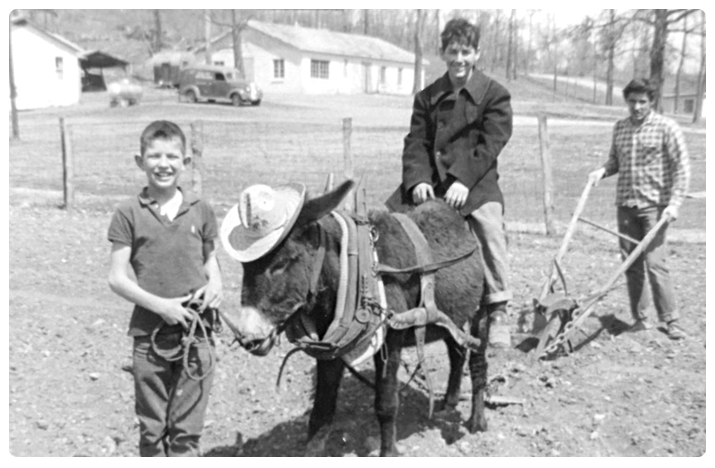 Cookson Hills was founded on love of God and love for humanity, especially children who were hurting, abandoned, or abused. This is the story of that small beginning and how it has unfolded throughout the decades.

Howard and Joyce Dillon traveled to northeast Oklahoma and saw a vast need for mission work. In the early 1950s, the Dillons left the Kiamichi Mountains they had been serving in and purchased 1000 acres of wooded land in northeast Oklahoma for $10 per acre. Howard bought a portable sawmill to cut timber with the help of his sons and built a house for his large family. The sale of lumber furnished their living.

Meanwhile, Arnold and Eva Kernan, from Boise, Idaho visited the Dillons while traveling to represent the Boise Christian Children’s Home. The Dillons and Kernans found they shared the same dream, and foundational plans were laid for what we now know as Cookson Hills. The Dillons offered Cookson Hills 400 acres of their land, including their home, barn, machinery, and sawmill. Another generous family from Iowa donated two house trailers and a large truckload of furniture. This donation, along with new staff members, including a teacher and farm manager, allowed operations at Cookson Hills to begin. The first child, a 16-year-old boy, arrived in February of 1957.

In April 1957, the Dillons wrote letters to all the Christian Churches in the vicinity asking each to send a representative to organize the policies and program of the school. These representatives became the first Board of Directors. By the first school term, 10 children were enrolled. The first permanent building, a one-room school in front and dining hall in back, was constructed, followed by a house. However, children were already being turned away due to lack of space. The desire to see hurting children experience the joy that Christ brings served as inspiration for the first Cookson Hills motto, “Where Youth Help Themselves to Happiness.”

By 1960, the Kernans were physically exhausted and ready to pass the torch. They met Lawerence and Ellen Hallum at a summer church camp where Arnold convinced Lawerence to pray about the possibility of assuming the leadership role at Cookson Hills. Lawerence, feeling unqualified and incapable realized that “No one is really qualified for any position unless God grants the qualification.” He prayed and in January of 1961, Lawerence, Ellen and their two children, Awynne and David, arrived at Cookson Hills.

That same month, the Board of Directors met and set forth a two-year plan that would include the building of a dining hall, superintendent’s home, and barn. In addition, the Dillons sold their home and 520 acres of land to a couple who generously donated it directly back to Cookson Hills. Immediately, children were able to live in that home. The Hallums traveled every weekend raising support and working to get finances in order. While this was a testing time for the ministry, soon the compassion shown to children at Cookson Hills would awaken the support of churches near and far.

In the spring of 1962, the Board set forth new plans calling for two new homes, each with room for twelve children and “Central Heat” would be furnished by a fireplace located in the living room. Construction was economical. Cookson Hills boys and men dug footings, poured cement, and made cinderblocks for the walls. The Lord faithfully and quickly provided. These homes were completed, and in use, within one year.

With a rising number of children in care, the school continued to expand. By 1963, all eight lower grades were in session. High school students attended school at Kansas Public High School. However, the public school was not meeting the needs of the children. The Board met, prayed, and planned. In September of 1964, a high school/gymnasium was almost complete, so classes were held outside until it got too cold to bear. Students and teachers met amid the hammers and finishing touches of construction. The first (and last, until 1985) graduating class received their diplomas in 1966. Due to state accreditation requirements stating that a high school must have at least 100 students, Cookson Hills high school students returned to Kansas Public School for the time being.

By 1965, 78 staff and placed children were being cared for at Cookson Hills. However, it was still necessary to turn down requests to take children almost every day. That same year two more childcare homes were built. Also, the final 80 acres (of the original 1000) were purchased from the Dillons. Plans were made to build six new childcare homes and a dining hall on this tract of land a little further down the highway, known as “The 80.” A challenge went out for 70 churches to give $1,000 each. Over 50 churches and many individuals responded. The Lord was answering prayers. By June of 1968, plans for “The 80” were completed and the Lord was sending couples to be houseparents.

Towards the end of the 1960s, Cookson Hills realized the need for a local church home with the capacity for all the adults and children living at Cookson Hills. Transportation into Siloam Springs was becoming a major expense. After a season of prayer in 1967, land was purchased in the town of Kansas, Oklahoma. Many staff and students helped build the church building, including the wooden pews and welding the lights. On June 7, 1969, Kansas Christian Church was established and dedicated. This exponential growth in the 60s was appropriate because Cookson’s motto had become, “A Home for Homeless Children,” and the heart was to have space for those who needed it most.

ABOUT THE AUTHOR — Rachel Wages, Executive Assistant, is from Montana, and loves coffee and traveling with her husband and kids. Her greatest joy in life is being a daughter of the King!