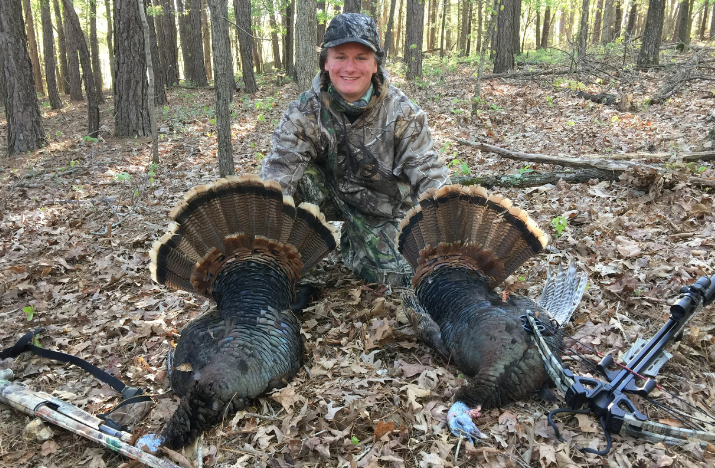 I still remember mine because it was just a few months ago, in the spring of 2020. It is helpful to learn to hunt if a person wants to eat meat; I think all people should know how to get their food and where it comes from, and how powerful a gun is. Hunting also teaches you how to be responsible for God’s creation.

It took some time for me to learn how to hunt. It all started with a 4-Him class on hunting safety with Mr. Kelly. Ken Kelly, or as I call him, Uncle Ken is not only my music teacher, but he is also an Oklahoma Hunter Education Instructor! Before I was allowed to handle a gun, I had to pass the Hunter Safety License Test with him. One of the most important things I had to learn was that a gun is a tool and not a weapon and can be dangerous if misused. I spent over 40 hours in the classroom training and outside for shooting practice before I was ready for turkey season.

It starts with an early morning

I woke up at five o’clock to hunt with Uncle Ken. This was the fourth time I had gone out, and I was hoping I would finally get something. Dressed in my hunting gear, I headed out to the living room to wait for Uncle Ken to show up. I sat there for about ten minutes before I saw headlights drive down the dark road. I went out the door to get into the truck.

“Yeah, hopefully we get something today.”

We then headed to the back pasture. We got out of the truck with all of our stuff and headed up to the blind. The walk there was quiet and cold. We couldn’t see very far, but we knew the way because we had been back there so often. After we got there and settled, we waited for about four hours. We were about to give up because we hadn’t heard a thing. We were whispering, but then we heard a really close gobble.

The turkey was behind us at the bottom of the ravine we were on. Uncle Ken grabbed his call and started to talk with the turkey. He would call every fifteen minutes, and the turkey would respond. This went on for about two hours, but then it went silent.  He had me practice raising my gun slowly so that the turkey wouldn’t see us. Thirty minutes passed without a sound. Uncle Ken and I started to whisper because we hadn’t heard anything in a while. Then I heard them. In came two jakes from behind us. I began to raise my gun slowly and as I did Uncle Ken went to grab his phone, but the stick to the call fell to the ground. We held our breath… but the turkeys didn’t stop or even worry about the noise.

Their time had come

I breathed in and breathed out, then fired. The gun was so loud, I was deaf in my left ear for a while. My turkey dropped to the ground and the other turkey just jumped up and started to walk away as if nothing happened. So Uncle Ken picked up his crossbow and fired at the other jake.

We took pictures with our turkeys, grabbed all of our gear, and headed back to the truck. The walk was great because the woods were full of energy with the birds singing. We loaded up our turkeys and gear, then got into the truck to get home to show my family what I got.

“Your brother got a nine and a half-inch beard on his turkey. I know that is longer than the one you have on the jake, but it’s OK. I can’t say how proud I am of both of you.” Uncle Ken said as we drove back to my house.

Once we got home, my family and cat ran out to see my turkey. Our cat went over to the turkey to try to figure it out but he was kind of afraid of it. Dad and Uncle Ken talked for a little bit; but then it was time to clean our turkeys.

Hunting has taught me more about how to take care of my environment, and it has strengthened my stomach. I’ve always wanted to hunt, but now that I have hunted and actually gotten something, I want to make it a life-long activity. Hunting is hard, so if a person is looking for a challenge, they should definitely try hunting.

ABOUT THE AUTHOR — Nicholas, class of 2023, came to Cookson Hills in 2011. He enjoys hunting with Mr. Kelly, hanging out with friends, and playing on the basketball team.