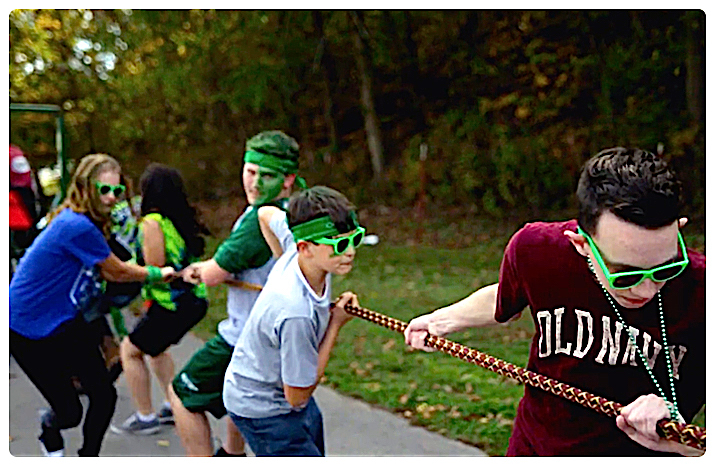 My Story of Service — Amy

The first time I traveled to Cookson Hills was in May of 2013. Our Southeast Christian Church children’s staff was asked to come and share during a spiritual emphasis week. We arrived, armed with worship equipment, props, costumes, supplies, everything we thought we’d need to share God’s big story with these kids. Little did we know that God would share their big story with us.

At first, the kids were very shy, unsure of what we were doing or why we were there. Some seemed standoffish and let us know right away we had to earn the right to speak to them. It took a little while, but after three days we had earned their trust, and new friendships had budded. My team and I had learned so much about how God was transforming these young lives, one day at a time.

I will never forget my third trip to Cookson Hills. We had just arrived and walked into the dining hall. Two twin boys ran up to us and yelled out, “You’re here!” We had gone from being strangers to family. It felt so good that the relationships planted two years before had grown and flourished. The kids accepted us and welcomed us into their world!

That same year, we invited a Cookson Hills’ high school student to sing lead on a song with us during the program we presented for the entire Cookson Hills family. When I first met her, she seemed a bit timid. As we started rehearsing, she became more relaxed; I realized she was good…really good! She had an amazing voice! But she was fairly new to Cookson Hills and none of the other kids really knew she could sing. When she took the mic and started pouring out her heart, the room became electric. By the end of the song, everyone was on their feet and I watched a sweet girl who seemed unsure of herself at first, stand tall. It was an amazing night.

I have traveled to Cookson Hills several times and each time I go back, God blesses me with new friendships, experiences, and an overwhelming appreciation for how the houseparents, teachers, and staff give everything they have so each child has an opportunity to heal and learn that God has a fierce love for them. I can see God putting lives back together, mending hearts, and pouring His grace and love over children who desperately need him.

ABOUT THE AUTHOR — Amy Henson is the K-2 Children’s Director at Southeast Christian Church and is from Louisville, KY. She loves her family, DIY projects, and chocolate!