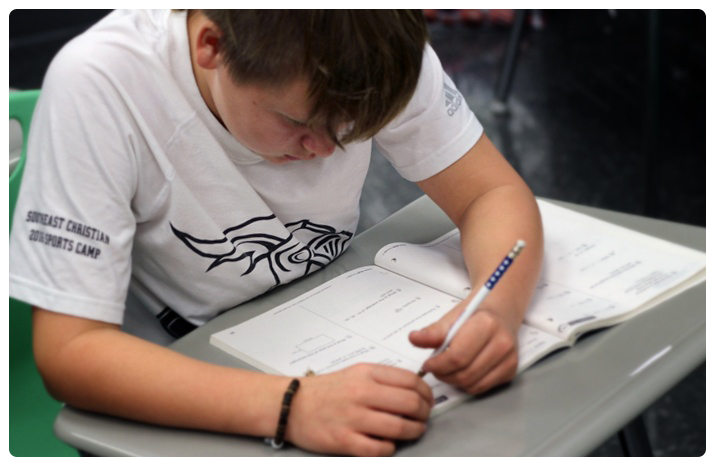 Nicky and the Math Test

Nicky was so mad. It was the third time I called him back to fix the corrections on his math test. Each time he handed me the test, he scurried over to play with the other kids who’d finished. The distraction was obviously more than he could handle.

“Hey, why don’t you come over here and go over these with me.”

I was surprised his eyes were still connected after the eye roll he gave me. He grudgingly dropped down in the chair next to me at my desk. I went through the problems, asking him to explain to me what he did wrong and what he needs to do to fix it. His posture and body language told me that every question was an insult to his very being and that I was wasting his time even talking about it because, obviously, he “already knows all this stuff.”

After a few minutes, I leaned over and softly asked him, “Are you mad at me?”
He didn’t deny it but just looked at me, telepathically yelling, “Obviously! I really want to go over there and play the game. It doesn’t matter if I do this or not! I DON’T NEED THIS!”

Still quiet, I looked at him in earnest and confessed to him, “Man, if I were you right now, I would be so mad at me. So mad!’

His face changed a bit, from livid to almost confused, but he was still not happy. He relaxed slightly, and I could tell he was listening.

“Because you’re a teacher.”

“OK. But why am I making you go back over this? I could just give you the bad grade and move on. I don’t have to let you look at what you missed. Why am I doing this?”

“Because you want us to learn.”

He just looked at me, not quite seeing where I was going with it.

“Nicky, it’s because I care. If I didn’t care, I would just make you keep the grade you earned, with no chance of learning from your mistakes.”

He exhaled slowly, relaxing; his face softened, and he nodded in understanding. The anger and frustrations leaked out and were replaced with a calm determination to figure this stuff out. Oh, the joy that flooded my heart. He scooted up next to my desk, said, “OK”, and we got to work.

Two weeks later, Nicky took another math test. Maybe I did something different; maybe he did something different, but when he came into my classroom at the end of the day, and I showed him his test, his face broke out into a wide smile of confidence as he took in the stickers and bright pink gel pen proclaiming “-0!! WOW! Way to go!!”

Obviously, regardless of his attitude, I would have helped him. I love these kids regardless of how they feel about me. Angry, happy, sad, annoyed. But it’s the most fun when I get to see all of the emotions and the story has a happy ending.

ABOUT THE AUTHOR — Ashley Allsbury, Middle School Teacher, is from Edmond, Oklahoma. She enjoys good conversation paired with good coffee, teaching at Cookson Hills, and watching a variety of nerdy movies and TV shows.