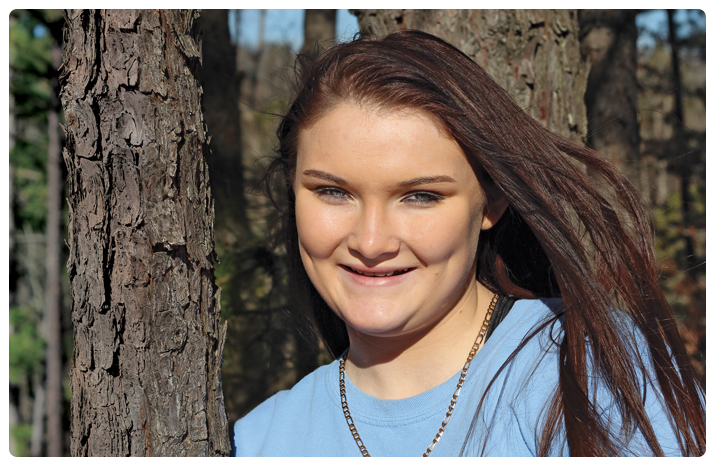 My Story of Hope – Bri

Prior to Cookson Hills, I didn’t know what it was like to be a part of a healthy family. My mom and dad weren’t able to take care of me. My dad was on drugs, in and out of jail, and my mom was always working. They lived in a messy house, and my diaper often went unchanged. So at 2 months old, I went to live with my great-grandparents.

During that time I was very sheltered. I was so attached to my great-grandparents that just leaving the house, or not being near them, would cause me to break down. They were very protective, so all I saw was the good in the world because they hid me from the bad. At the age of 7, my grandma got sick and I stayed the night with my mom and step-dad. I cried all night. In the morning, my grandma called and suggested my mom keep me since her health was so bad she could no longer care for me. I felt unwanted.

As time went on, I developed a terrible attitude; I was a real smart aleck. I was grounded a lot and was always getting into trouble at school. I didn’t like my step-dad, my mom, or the way they treated me, so I constantly acted out. I refused to listen to my step-dad. I felt like he was trying to replace my great-grandpa and my real dad, both of whom I had good relationships with, even though they weren’t perfect.

At age 11 my great-grandma died, and I went crazy. I threw a chair; I was messed up. It was like losing a mom because she was the one who had raised me. After she died, my great-grandpa moved in with my cousin and aunt whom I didn’t get along with. They treated me poorly because they were jealous of all that my great-grandparents had done for me. Regardless, I would hang out there on weekends just to be with my great-grandpa.

Between childhood innocence and my great-grandparents keeping me sheltered, I had never realized what was happening around me, including the drinking and drugs my family was involved in. But, when I was given more freedom, I felt like those things must be okay because my family did it. So I started smoking pot, drinking, and doing things with boys I shouldn’t have been doing. From then on, I just went downhill. At the age of 12, I ran away for two days. My mom sent me to rehab for about a month and then I arrived at Cookson Hills.

When I first got here, I didn’t want to listen to anyone. I was mad at my mom for putting me here. It felt like my family just wanted to get rid of me, except my grandpa, who didn’t really know what I had been up to and I would have been ashamed for him to know. I didn’t want to change. I was very defiant, refused to do anything, and I didn’t think I would make it to graduation. I was sure I would get kicked out. It took time, but slowly I began to want to change.

My houseparents helped me a lot. They would let me make my own decisions and would explain what was wrong with the bad choices I was making. When I messed up and when I upset them, they would let me know and tell me how that affected our relationship. Growing up, when I asked why I was being punished, the response was always, “Because I said so…” Once my houseparents started helping me see that my actions caused them heartache and pain, I wanted to change even more. I also realized that I would be at Cookson Hills long term, so I thought about what I could do. I started putting 100% effort into school, tried to focus on accomplishing my personal goals, and started working on having better relationships with my family.

I began looking at my houseparents as my mom and dad. They model for me what a parent should be like, and I feel like they treat us kids the way we should be treated–not how my biological parents did. Cookson Hills really gave me a different view on life, of how things should be, instead of what my experience was.

I have really come a long way. What I had been doing before Cookson Hills in school and in life were affecting my future; I was headed down a bad path and I had to change. I needed to grow up, and the people there helped me want that for myself. I now know there’s a different way to look at things.

One day at volleyball practice, I was about to serve a volleyball when Coach told us to stop. I wasn’t paying attention and I hit the ball anyway, hitting Coach right in the head. He got on to me, reminding me he had said to stop. This really upset me because I respect Coach and I didn’t want him to think differently of me. I felt really bad. The assistant coach noticed something was wrong, so she pulled me aside and asked me if I needed to talk. That’s when I started crying.

I began to share that, as team captain, I should have been more responsible. I felt like I had let my team down. You can imagine my surprise when through my tear-filled eyes, I saw my assistant coach giggling. She put her hands on my shoulders and looked me in the eyes and said, “Bri, how your heart has changed. Last year you wouldn’t have felt bad. You would have found a way to turn it back to be Coach’s fault.” It’s true. Last year, I would have cocked an attitude and yelled at him for “yelling” at me. This was the first time I really noticed the change in myself. Sure, other people told me they could see how I’d changed, but in that moment, I really saw how far I have come.

My houseparents have also really helped me develop a relationship with God. When I have questions about faith, we sit down and they answer to the best of their ability. They show me that in their own relationships with God, they take it seriously and they listen to Him. I didn’t grow up with a healthy godly example, but my houseparents are GREAT examples of that. In fact, this past Sunday, my housedad baptized me! I’ve always known that God exists. But now, He’s real to me. Even when He seems quiet, it’s because He’s directing my life, not because He isn’t there. He’s always working.

Cookson Hills has given me a different perspective on life, how I can live it, and how I can treat other people. Everyone has their problems and you have to work past it. I am working very hard towards my goals and my future now. I hope to work as a CNA and be a labor and delivery nurse. If I were to give my 12-year-old self some advice, I would say, “What you are doing now controls your future; your life will be what you make it.”

ABOUT THE AUTHOR — Bri, class of 2020, is from Ponca City, OK and she loves volleyball, Chinese food, and shopping.