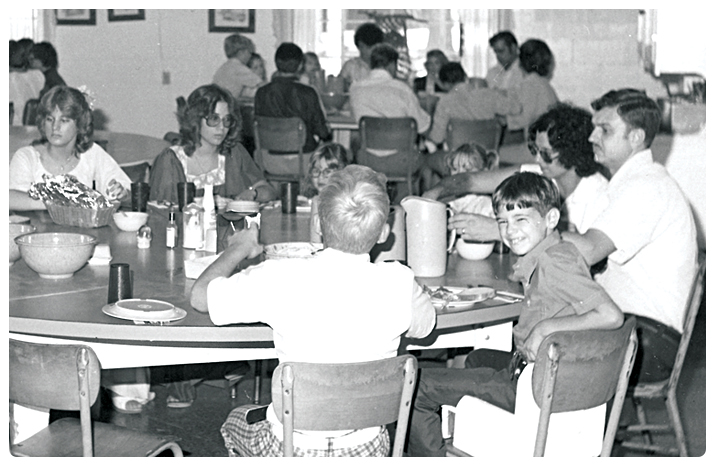 The 1970s brought rapid growth to Cookson Hills. The motto became “Serving Children with a Need,” and the intent was to fill needs that were observed in the lives of children who were hurting. This intent became clear by the growth of the main unit in Kansas, Oklahoma, and the addition of 12 satellite units. This is the story of the 1970s and the growth and refinement period of the satellite units at Cookson Hills.

In 1970 a larger elementary school building became a reality and the original two-room school building was converted into a print shop. The new educational facility included 8 classrooms, a library, and offices.This building would serve grades 1-8 until December of 2013.

1971 until 1991, Cookson Hills ran an unwed mothers program. This program served girls in a home environment by helping them with medical needs and education. Many of their babies were placed with Christian, adoptive families. The adoptive parents paid for the girls’ medical expenses during their pregnancies. Sometimes the young mothers opted to keep their babies and Cookson Hills helped them get an education so they would be able to support themselves and their child. To this day, families who adopted through Cookson Hills reach out to us and share with us their beautiful and successful stories of adoption. These were all performed as closed adoptions. Children and mothers who would like to be reconnected with their biological family must reach out to Cookson Hills. If the opposite party has also requested information, then the child and biological mother will be put in contact with one another.

Another major change through the 1970s was the establishment of satellite units around the country and even abroad. These 12 satellite units were geographical expansions of the services Cookson Hills was already providing. Churches, communities, or individuals reached out to Cookson Hills, offering land and buildings for the purpose of providing more space for the care of children.  Ralph and Leona Gorman joined our staff and were instrumental in the expansion of these units.

Many of the units went on to operate for about 25 years before Cookson Hills entered a period of refinement. This refinement period led to the closure and transfer of property at each unit. The main reason for the decision to close the outer units was that child care had become more technically oriented with new standards, regulations, and internal quality control demands. Standards varied from state to state, and we were present in 9 states and 2 countries, making things increasingly difficult.  Because of these varying standards, Cookson Hills had difficulty keeping the units adequately staffed, supervised, and financially supported. All in all, we had 12 satellite units and one main unit, based in Kansas, Oklahoma.  Here are the stories of the beginnings of those units:

1968  Oberlin, KS – The city of Oberlin wanted to use their beautiful, 480-acre state park for a worthwhile purpose. The grounds and existing buildings were ideal for developing a home for children, and so the property was given to Cookson Hills. By 1972, the campus held three, 2-story child care homes, a dining hall, shop building and a beautiful location to provide opportunities for gardening and ranching. In 1995, Cookson Hills ceased operations at Oberlin and gifted this property to Boise Children’s Ranch.

1970  Syracuse, KS – This small section of land held two child care homes. Due to the smaller number of children being served, homes were built with kitchens, instead of building a separate dining hall. Located in an arid part of the state, this unit focused on livestock and irrigated gardening.

1972  Niotaze, KS – This property held 1 child care home, 1 staff home, and mostly hilly and timbered farmland. Cattle and hay programs were developed at this location. This unit was closed in 1987.

1973  Alba, MO – Built on 80 acres adjoining Camp Cyokamo, this property was donated so that the Cookson Hills houseparents could also act as the Camp Manager.  A home was built and children were placed in that home. The children at this location had a unique experience as they were able to attend College Heights Christian School in Joplin and the various weeks of camp offered by Camp Cyokamo. This unit was closed in 1998 and the property was gifted to Camp Cyokamo.

1973 Mountain View, MO –  A group of 13 area-churches purchased 355 acres of land in Ponoma, MO. In 1974, the first home burned down. The community came together to clear the debris and within a few days, construction began again. By 1976, 2 homes and a barn were built.  There was always cow to be milked, chickens to feed, hay to haul, and fences to mend at this hilly location.This unit was closed in 1995.

1975  Lake, MS –  Mississippi area churches knew they needed a children’s home.  So, they purchased 192 wooded acres and asked Cookson Hills to take over the building of a children’s home. Cookson Hills sent a team of workers to complete the first home in 1975. This unit was closed in 1989. The property was handed over to a Cookson Hills employee who worked at this unit and it is now known as Sunbelt Christian Youth Ranch.  They provide a home and school for youth who are at-risk.

1975  Homer, AK –  Cookson Hills assumed responsibility for an existing children’s home in Homer, Alaska. Ralph Gorman led the 4,000-mile trek and oversaw repairs and remodels to transform the facilities. Additionally, a boat was built to fish for halibut, salmon, and king crab. Moose, sheep, goat, and bear were hunted making one of the most unique diets of any Cookson Hills location! This unit closed it’s doors in 1983 as it cost twice as much to care for a child at this location due to the high cost of living in Alaska.

1975 Canadian, TX – Concerned by a number of children who needed a home, the First Christian Church in Canadian, Texas funded the purchase of 400 acres in West Texas and 1 home. In 1976 a shop was built to protect machinery and teach mechanics and welding to students living there. This unit was closed in 1994 and the property was given back to First Christian Church.

1975  Seffner, FL – In 1974, a Christian couple near Tampa offered their land and remaining balances of $40,000 to establish a satellite unit. Florida area churches and individuals came together to cover the $40,000 cost so that the home could begin. This property would go on to have four child care homes, a few cows, and a ten-acre orange grove. Cookson Hills transferred operations to Family Ministries in 2000. They are a residential facility for youth who are at-risk, They also provide a private 1-12th-grade school to their residents as well as those within their community. 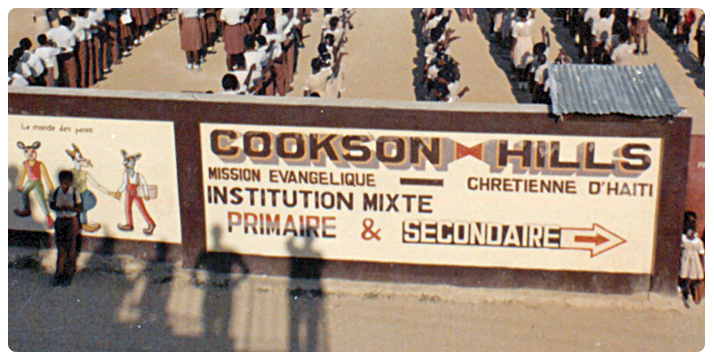 1977  Port-Au Prince, Haiti – Cookson Hills received a unique request to visit Haiti where poverty and homelessness abounded and consider opening a children’s home there. Ralph Gorman made the trip and determined immediately that the Lord required Cookson Hills to share our blessings with the people of Haiti. A Haitian preacher was attempting to care for children by taking them into his own home. At the time of Gorman’s visit, the preacher had 41 people living in his three-bedroom home. Almost immediately, Cookson Hills began construction of a three-story orphanage and completed the first 2 floors within 3 months. The orphanage had a capacity for 76 people on the first floor with church services, school classrooms, and a nurse’s station on the 2nd floor. A day school was started and a part-time native nurse was hired to care for the medical needs of the children. 1979 saw the completion of the third floor as apartments for staff members, as well as a medical clinic and chapel. In 1995, Cookson Hills transferred this operation to Lifeline Christian Mission.

1979  Knoxville, TN – This location was given to us by a couple in Knoxville. It had one home that was able to house 6 children. The unit faced many issues with state licensing requirements and was, unfortunately, short-lived. The property was returned to the donors by 1981.

1979  Siloam Springs, AR – This final location became known as our “Extended Services Ministry”. This unit was dedicated to helping young adults who were unable to finish high school or not ready to live on their own yet. Houseparents in this unit helped young adults obtain a job, set-up a budget, and guide them to living productive lives. This unit closed in 1991.

Cookson Hills also helped the nearby community by helping to build a medical, vision, and dental clinic in the town of Kansas, just six miles north of the main campus. Many of the satellite units would travel to this medical clinic to have their children’s dental and vision needs cared for. The focus of Cookson Hills during this decade was made clear in the motto, “Serving Children with a Need.” The main unit and satellite units allowed for more children than ever before to find a home with Cookson Hills.

ABOUT THE AUTHOR — Sarah Curry, Manager of Storytelling Group, is from Jamestown, Ohio and enjoys volleyball, spending time with her husband and daughter, and belting the Wicked Soundtrack at any given moment.

Rachel Wages, Executive Assistant, is from Montana, and loves coffee and traveling with her husband and kids. Her greatest joy in life is being a daughter of the King!