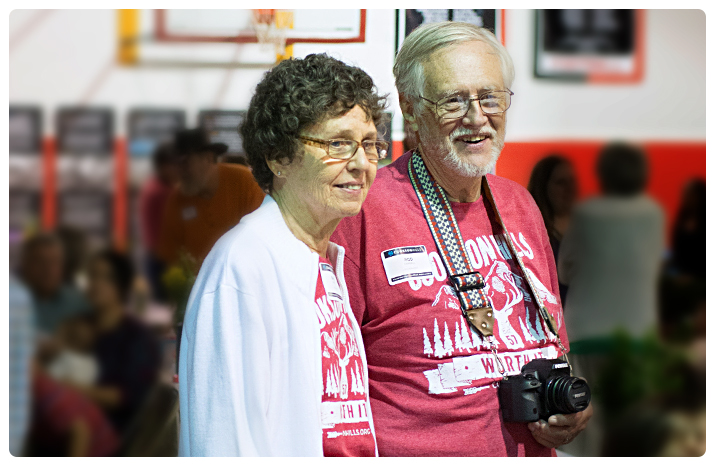 Our Story of 47 Years of Ministry to Children

It started with a simple letter. In 1971, I wrote to Cookson Hills to see if they needed any photography teachers. They wrote back, “No, but we need houseparents. Come and visit!” So we came to check it out. And now, 47 years later, we’re still here.

When Barb and I first moved to Cookson Hills, we began as houseparents. During our interview, one of the housedads, Bud Pummill, took us up on the hill and laid everything out. He said, “You’re not going to have any private time as a houseparent and you will face many challenges.” He told us about the various difficulties but then concluded with, “It will be the hardest job you’ll ever love.”

That statement proved to be true right from the start. Just two months after beginning our role as houseparents, we decided to visit our parents for Christmas. So we loaded up our van with 12 kids and began the drive to South Dakota. We ended up dropping off three of the kids along the way with their families and then brought the other nine with us for Christmas.

There was also a Preacher Boy contest in southern Oklahoma where students would prepare sermons and then get together to deliver them. We had a student participating in the Preacher Boy contest so I took our boys down there one year. It was a weeklong conference so I took the seats out of the van and built bed frames. Then we put in some mattresses and slept all week in that van! Can you imagine that? Life as a houseparent always seemed to be an adventure.

After about two years of house parenting, the principal of the school suggested I go back to get my teaching degree. So I did. I got my bachelor’s degree in elementary and special education. I really enjoyed the idea of teaching, but there was one area I always struggled in: Math. I remember saying, “Lord, I want to teach, but just not math.” And you know what I taught those first two years? Math, and of course now it’s actually one of my favorite subjects.

As the years passed, God continued to use us in all sorts of ways. I taught special education, served as a teacher, the high school principal, the superintendent, and eventually the executive director. After that, I traveled for Cookson – visiting churches and individual supporters to raise funds. Barb, my wife, also had various roles: helping in school with special education, serving as a teacher’s aide, working in various secretarial positions, and now she serves faithfully in our donation center.

I was once asked, “What job have you enjoyed most?” The answer is all the jobs. There are good things and bad things about everything you do, but you can make the choice to enjoy it. I believe the Lord brought Barb and me here for what he wanted us to do. And through it all, we were just willing to adapt.

Over our 47 years at Cookson Hills, we have seen many changes. But more importantly, we have seen many things stay the same. Cookson Hills is still a strong Christian organization with an emphasis on teaching the Bible. We still care about ministry to children, and there are still countless stories about how children’s lives are being changed.

I wanted to close by sharing a few notes that I received from some of our students back in 2002:

I’ve learned since being here that you must put everything in God’s hands. I’ve also learned that no matter how many cookies there are, you never get any when you have nine other siblings.
— Sarah

I have lived at Cookson for 11 years. I’ve learned to accept people as they are and to have faith that when they change, they mean it. Anything they did before they lived here is inconsequential to anything after.
— Nikki

I’ve learned so much here at Cookson. The most important thing is to remember that God is always here and He is good.
— Amanda

I have learned that God gives us grace and when we ask for forgiveness, it’s over. God looks at us as if we are pure as snow.
— Laysha

ABOUT THE AUTHOR — Rod Ramsell is now officially retired, although you wouldn’t guess it if you looked at his schedule. He spends his days in the school helping as a Reading Resource teacher and Barb still serves faithfully in the donation center. They just recently celebrated their 50th wedding anniversary together.